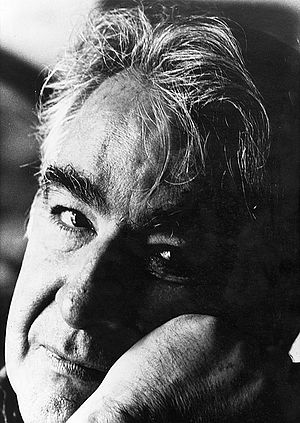 Alvaro Mutis moved when he was very small with his family to Brussels. He lived there until he was nine years old, when he returned to Bogotá. He left school before he had gained his high school diploma in order to pursue a career in poetry, the first genre in which he cultivated a long and fruitful literary career. He began by publishing poems in newspapers and journals, and in 1953 Rafael Alberti and Guillermo de la Torre included his work in the collection Poetas de España y Latinoamérica. Shortly after that he travelled to Mexico, where Octavio Paz helped him to publish in literary supplements and magazines. A great friend of Gabriel García Márquez, his talent as a novelist was only developed late on when he created the character of Maqroll. Considered to be one of the most important writers of Hispano-America, Álvaro Mutis has received a great many awards, including the Premio Príncipe de Asturias and Premio Cervantes.

Maqroll the Gaviero (the Lookout) is one of the most alluring and memorable characters in the fiction of the last twenty-five years. His extravagant and hopeless undertakings, his brushes with the law and scrapes with death, and his enduring friendships and unlooked-for love affairs make him a Don Quixote for our day, driven from one place to another by a restless and irregular quest for the absolute.

Álvaro Mutis's seven dazzling chronicles of the adventures and misadventures of Maqroll have won him numerous honors and a passionately devoted readership throughout the world.

"And if you want to change your life - for the better - and have never read the Colombian novelist Alvaro Mutis, you owe it to yourself to get acquainted with The Adventures and Misadventures of Maqroll. A collection of seven novellas that can be read at a run or singly, it features the greatest rainbow-chaser since Quixote, but a lot sexier and ravenous for both learning and love, not to mention fantastical, doomed schemes to make a pile of loot." Simon Schama, The Guardian

"..a newborn classic, a latter-day "Don Quixote" whose central persona, both amusingly shadowy and adamantly consistent, moves around the globe somewhat as the Knight of the Mournful Countenance traversed the plains of Spain." John Updike, The New Yorker, January 13, 2003

“Though each of these entertaining and elegant novellas can stand on its own, the cumulative effect is of an epic novel. Mutis is a writer of the first order. I admire his work very much and can only encourage others to read him.” Oscar Hijuelos

“Recalls Joseph Conrad. And one can think of Maqroll himself not only as a Byronic figure but also a male counterpart of Isabel Allende’s Eva Luna; both are spellbinding storytellers.” Boston Globe

Ilona Comes With the Rain features a woman who is brainy, beautiful, sexually venturesome, occasionally larcenous, a fit match for Maqroll. She almost steals the novel from him (why not, given that she's the title character?).

The Snow of the Admiral, the first novel about Maqroll, is reminiscent of Joseph Conrad's Heart of Darkness in that the core of the novel is Maqroll's journey up a tropical river in pursuit of a goal that, though superficially clear and well-defined, becomes as mysterious and hopeless as the incidents that happen to him.

The Mansion is a series of poetic, linked stories of a fabulist nature. In The Mansion Mutis introduces the odd characters who inhabit a large house on a coffee plantation owned by the distasteful Don Graci, and relates the unfortunate events which force its abandonment.

Álvaro Mutis is celebrated internationally as the author of the seven novellas, written between 1986 and 1993, that constitute the legendary and widely loved Adventures and Misadventures of Maqroll. Maqroll, the Gaviero, or watchman, is a wanderer on the face of the earth, always in pursuit of love and fortune, even as he knows that neither can nor will last. Few know, however, that Maqroll made his first appearance, and established his myth, not in prose but in poetry. Starting 1948, Mutis published several volumes of surrealist-tinged poetry, but with an unmistakable voice of his own, gaining the admiration of Octavio Paz and Gabriel García Márquez, who would later call him “one of the greatest writers of our time.” Here a selection of Mutis’s haunting poems—invocations to a hidden god, private talismans of an outcast spirit.