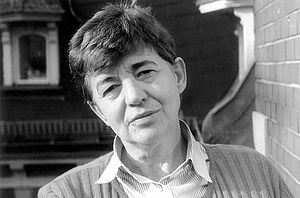 A precocious poet and storyteller, Ana María Moix studied humanities at the University of Barcelona and came to fame as the only woman included in the well-known anthology edited by Josep María Castellet entitled Nueve novísimos poetas españoles. Her poetry output dates from the years 1969 to 1972, during which period she published three collections of poems that in 1984 were brought together in a single volume, A imagen y semejanza. Her first novel, Julia, stood out from the moment it was published for the richness and subtlety of the author’s prose. Today, it is considered a classic of Spanish literature. A member of the group “la gauche divine” who called her “La Nena” (“the Girl”), Moix spent many years interviewing and profiling her peers and the authors of the boom. She also produced a great many translations, and edited poetry and short story collections for the publishing houses Plaza and Janés y Bruguera.

Through the long hours of one sleepless night, twenty-year-old Julia sorts through the story of her life so far. Set against the backdrop of Franco’s forty-year dictatorship, her personal history reveals its own small tyrannies, intrigues, and struggles for independence, laced with the sweetness and sadness of first loves, losses, and hopeless entanglements. Sleep may elude Julia, but the dreams and nightmares of a brief yet crowded lifetime of memories accompany her through the night, in particular memories of her beloved grandfather Don Julio, who fought on the losing side in the Spanish Civil War. It is his revolutionary fervor that inspires Julia, helping her to cope with a self-centered mother, an overbearing grandmother, would-be boyfriends, even the discomfiting ghost of her own younger self.

This autobiographical novel marks the first appearance of the daring style and consummate skill that distinguishes Ana María Moix’s work and quickly established her as one of the most innovative and entertaining writers in contemporary Spain. Though touching on themes as dark as death and political repression, Julia’s story is, in the delicately balanced authority and lightness of Moix’s language, ultimately one of hope.

Ten stories complete this collection of emotionally charged characters connected through a complex interweaving of repeated themes. Their tales include the humorous dynamics of a tour group in Italy; the haunting reality of a man who loses interest in his soccer team; a dead mother whose ghostly apparition wanders the city streets at night; unusual relationships between couples; and the transformations of the everyday. The rigorously detailed stories conceal the twist endings that await, allowing a glimpse into strange and amusing worlds where nothing is taken for granted and everything is open to question.

The five stories collected in Dangerous Virtues (Las virtudes peligrosas), each varying greatly in style and substance, are among Moix’s most remarkable writings. The title story is a mesmerizing account of the relationship between two beautiful women who communicate only by staring at each other. "Once upon a Time" is an ironical exploration of the unhappy life of characters from fairy tales and children’s rhymes. "The Naive Man" tracks an insufferable young man’s downward spiral into drunkenness. Other stories in the collection include "The Problem," a comic tour de force about the troubled sexual relations between a bickering married couple, and "The Dead," the chilling self-analysis of a young wife whose thoughts reveal her weakening grasp of everyday reality. Sophisticated and unfailingly original, all of the stories are instantly accessible and absorbing.