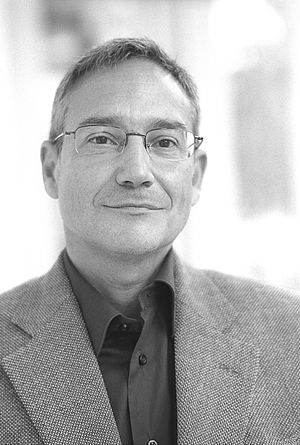 Esteban Martín gained a degree in geography and history from the University of Barcelona, and a master’s in writing for film and television from the Autonomous University. He also studied the arts of the book at the L’Escola Superior de Disseny i d’Arts Llotja in Barcelona. He is a member of the Catalan Anthropology Institute (Institut Català d’Antropologia) and founded the publishing house Littera Books in 2001. He contributes to various history journals and is a regular participant in cultural radio programmes. His novel La clave Gaudí, co-written with the journalist and writer Andreu Carranza, was very successful among readers and has been translated into more than 20 languages. With his second novel, El pintor de sombras, he has continued to cultivate a kind of fiction that combines historical figures and mystery writing. He has published poetry collections, novels, biographies, and fiction for children and young people.

In the times when Europe marvelled at the printing press invented by Gutenberg, Catalonia was witnessing a previously unimaginable revolution: peasants were rebelling against the abuses of their feudal lords while the king undermined the Catalan institutions...

In the times when Europe marvelled at the printing press invented by Gutenberg, Catalonia was witnessing a previously unimaginable revolution: peasants were rebelling against the abuses of their feudal lords while the king undermined the Catalan institutions.

Through the adventures of two young men in love with the same woman and fighting on opposite sides (a bastard in search of his origins and a fugitive who takes the invention of the printing press to Barcelona), the reader catches a glimpse of a cruel war that will have transcendental historical consequences.

Revolución is an excellent novel about the struggle of the less privileged to conquer the government of the city of Barcelona and, at the same time, a tribute to the power of books to transform the world.

Marina is a teenager in high school. She studies viola in the conservatory and lives in a comfortable and safe world. Her mother runs a library in the city centre and his father is an arquitect. They are a very united and happy family. However, everything falls apart in Marina’s life when the library closes its doors, her mother loses her job and his father studio loses little by little his clients. This is the story of a family with problems told through the eyes of an optimistic girl that is ready to change hers and her family’s situation. This tale is about how people in difficult times are able to unite, to be supportive, to be hopeful and to fight against a time of corruption, job insecurity and dismantling.

In the early twentieth century, when Barcelona was celebrated as the center of modernist art and design, the grand master of an ancient religious brotherhood prepares to die  – passing the care of a sacred relic to a prominent member of his order, the revered artist and architect Antonio Gaudi. The relic, an artifact dating back to the early Christian era, could prove disastrous if it were to fall into inappropriate hands and many secret societies, some driven by purest evil, inhabit the dark underworld that exists beneath the city's brilliant creative glow. Nearly a century later, Maria, the granddaughter of the great architect's apprentice, unwittingly finds herself entrusted with a desperate mission. Following clues, with the help of her mathematician boyfriend, that are embedded in a cryptic message left by her grandfather and the intricate symbolism of Gaudi's designs, Maria must race against time to unearth the fabled lost object and discover its true meaning... with violence, catastrophe, and death in terrifyingly close pursuit.

After watching Jossi Ornstein’s performance, Jacob decides that when he grows up he wants to be a magician. Five years later, Jacob and his dad can barely survive in a Nazi concentration camp. There, he reencounters Ornstein, who is now also a prisoner. At first, Ornstein seems to be unsociable and arrogant. Soon, though, he starts to use his magic to defend other Jews.

A great samurai finds a foreign baby among the remains of a massacre. He adopts him as a son, names him Sanada, and trains him in the path of perfection and the sword.

Thus begins this thrilling adventure saga starring a young samurai, of which Sanada. La corona de Alejandro is the fourth book. In search of his origins, Sanada ventures into Mongolian lands and loses his sister, Oyuki, in a sandstorm. Oyuki has fallen into the clutches of an evil chieftain who will only return her to Sanada alive if he can bring back Sikandar’s crown, an object endowed with magical powers and hidden in the mountains. To find it, Sanada must undertake a journey fraught with all manner of deadly perils.

A great samurai found a foreign baby among the remains of a massacre committed by bandits. He adopted him as a son, named him Sanada, and trained him in the path to perfection and the way of the sword.

The first book in this fast-paced adventure saga ended when Sanada, after risking his life to safeguard the fate of the Emperor, leaves in search of his origins. Sanada now continues his travels accompanied by his brother, Oyuki, and the precocious Fuma, in search of the mission headed by Father Álvaro de Mendoza, who can reveal his parents' identity. What Sanada cannot imagine is that the enemies he defeated in the past are bent on revenge, and a journey full of dangers and trials awaits him: an underworld where he is tormented by the souls of the dead, murderous female warriors adept at camouflage, terrifying, three-headed hybrid animals, and a fearsome Black Warlock, to whose spell our hero succumbs. Only with his sister's help will Sanada manage to return to the path of the perfect samurai.

On his way home after the war, a brave samurai encounters a sole survivor among the ruins of a Jesuit Colony wiped out by bandits. It's a baby with western features, who he decides to adopt as his son and call Sanada. While still a child, Sanada is sent to a great master to be trained in the way of the samurai. His training forces him to face all kinds of tests and adventures, which require the young apprentice to control his impulsiveness and impatience. Sanada must become a true samurai in order to undertake the terrible mission that fate has in store for him: to save the lives of his adoptive father and the emperor, imprisoned by a bloodthirsty warrior who threatens the entire Empire.

Jorge travels from Spain to Scotland to improve his English. While there, he lives with a family on a farm in a village close to Loch Ness. Life seems to be passing peacefully but suddenly he finds himself enveloped in disturbing mysteries that threaten the safety of his friends and the girl he has fallen in love with, Annabella. And this is not only due to the monster that lives in the loch, but also through the behaviour of some of the villagers. What is the strange bracelet all the members of the family wear? What is the meaning of the esoteric rites carried out in the early hours by certain of his neighbours? What is it that moves around in the waters of the loch? And, most importantly, why is Annabella so evasive? A daring adventure, an age-old legend, a secret that cannot be spoken.