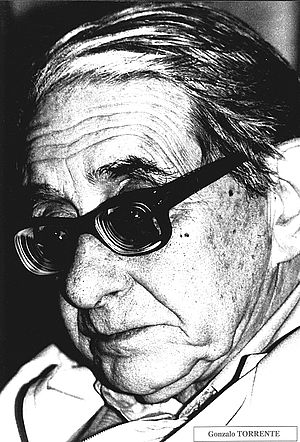 Gonzalo Torrente Ballester is an author who is key to contemporary Spanish literature. He graduated in Historical Sciences from the University of Santiago and became full professor of Language and Literature at the same university in 1940. For almost all his life, he taught, studied literature and was a theatre critic. He lived in several Spanish cities, and also in the USA. Playwright, controversial essayist, keen-eyed critic and prolific novelist, he became known to the public at large as a result of the television adaptation of his trilogy Los gozos y las sombras. Before that, his novel La saga/fuga de J.B was welcomed as one of those that brought fresh life to the fiction of the late-Franco period. He was elected to the Real Academia Española in 1975, and of the received many awards, including the Premio Nacional de Literatura in 1981, the Premio Príncipe de Asturias for Literature in 1982, and the Premio Miguel de Cervantes, in 1985.

The only complete edition and in one single volume of Gonzalo Torrente Ballester's most emblematic work, previously composed of The Lord Arrives (1957), Where the Air Returns (1960) and The sad Easter (1962).

Fantasy, irony, parody, humor and a masterful use of language are the instruments with which Gonzalo Torrente Ballester builds this complex and fun novel, developed in the capital of the fifth Galician province, Castroforte del Baralla, whose tranquility is disturbed when the relic of the Holy Body disappears. The title announces the content of the book: “saga", because it is a legendary chronicle of several generations; and “escape", because due to its peculiar structure, it takes part in the characteristics of musical "leaks". José Bastida will give a voice to the millenary history of this town; a narration of many destinies that develop through many different characters, following the incessant reincarnation of the same plot that covers multiple centuries.

One of the great classics of 20th century Spanish literature, and a sales phenomenon thanks to the TV adaptation. Replete with passions, betrayals, and deeply held grudges between two conflicting lineages embroiled in a power struggle on the Galician coast.

Pueblanueva del Conde, a coastal village in Galicia, watches as airs of social and economic change alter its centuries-old traditional order. Old landowners are giving way to new money, and the old fishing fleet resists the rise of the modern ship-building industry.

The long-awaited return of Carlos Deza, last of the Churruchaos line that has held power in the village from time immemorial, is viewed by the villagers as their last chance to challenge the supremacy of Cayetano Salgado, the new master of Pueblanueva, who rules with the impunity of economic power. However, Carlos’s indecisive personality and lack of interest in worldly matters will take the situation in unexpected directions.

The conflict, which also delves into the realm of passions involving most of the characters, vividly portrays the clash of eras and mentalities that occurred in pre-war Galicia. As late as the 1930s, Galician society was transitioning from the 19th century to capitalism with scarcely any fundamental change.

Joys and Shadows recovers the volumes The Lord Arrives (1957), Where the Air Returns (1960) and The Sad Easter (1962), to bring them together in a single edition to commemorate the twentieth anniversary of the death of the author.

A modern day classic which has already been turned into a film in its native Spain, a rip-roaring tale of royal gossip, natural and national disasters, political and religious intrigue set amidst the pomp and splendour of the seventeenth-century Spanish court.