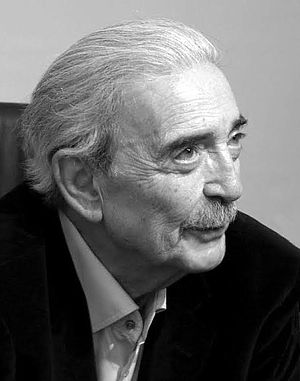 He was a prestigious Argentinian poet. A writer from childhood, he worked as a journalist and translator and was also a member of guerrilla organisations. In exile during the military dictatorship that took over in 1976, he returned to Argentina in 1988, although he was to settle in Mexico. Much of his life and writing were marked by the kidnapping and disappearance of his children and the search for his granddaughter, who was born in captivity. He was the fourth Argentine to be awarded the Miguel de Cervantes Prize, following in the footsteps of Jorge Luis Borges, Ernesto Sabato and Adolfo Bioy Casares. He is considered to be one of the great contemporary poets writing in Spanish. On his death, Argentina's President declared three days of national mourning.

Today (Hoy) is the final book published during the life of one of Latin America's most important and celebrated poets. Written as both a reckoning and a reflection following the 2011 sentencing of those responsible for disappearing Gelman's son Marcelo in 1976 during Argentina's Dirty War, Today's 288 prose poems vacillate between the depths of anguish and celebrations of the day, as the poet wrestles with being, loss, and the central paradox of much of his late verse: the injustice inherent in knowing anything that exists can't help being fully itself, while simultaneously mired in a process of becoming that has no attainable endpoint. Surprising, beautiful, and relentlessly questioning, Gelman's poetry pushes language's capacity for expression to its absolute limit. Readers will find the poems of Today a treasure trove—rich, moving, musical, and full of complex ideas, lingering imagery, and stunning turns of phrase.

"Grief and crushing darkness are the inescapable companions of these poems, whose world appears to be as fractured as the grammar and form of Juan Gelman's spare and concentrated verse. In this barbaric place where children are disappeared, where pain never ends and justice is ambivalent, the "poem of harsh lineage" and "unsheltered words" just may find, however, "perfection in the loss." —Sidney Wade

"Juan Gelman's last book is a work that grieves, that savors grief, personal and collective. Or more aptly, as ars poetica, these poems find the impulse to grieve deep in poetry itself as Gelman has written: "I've never been the owner of my ashes, my poems. [...] These elegant, chisel's edge inscriptions read like epigrams, like the very first epigrams, which were epitaphs engraved on tombs. The real compression in this poetry—always total—is that "the enormity of the pain covers nothing." —Michelle Gil-Montero

"I find it hard to read Hoy/Today without crying, but it's the kind of crying that's good for you. Full of sadness and beauty, spelling out loss and redemption, and absences remembered, the running verses of Juan Gelman's Hoy speak of longing, singing with sentiment and love." —Sergio Waisman

"This urgent, luminous text is doubly haunted: the poems by the murder of the poet's son, the translations by the death in 2014 of the poet himself." —Geoffrey Brock

“Perhaps the most admirable element of Gelman’s poetry is the unthinkable tenderness he shows . . . calling upon so many shadows for one voice to lull and comfort, a permanent caress of words on unknown tombs.”—Julio Cortázar

Dark Times Filled with Light traces the evolution of a gifted lyrical poet’s encounter with the political, when the poet’s son and daughter-in-law become “disappeared” by the Argentinian government, and the poet must write from both a literal and metaphysical exile.

“There are losses,” says Gelman in a moving understatement. “The important thing is how returning to them transforms them into something new.”

“Gelman’s poetry is epic in its scope—no corner of life goes unnoticed in this work. . . . Rendered in a breathless style, this is the diary of a human heart in a rough world where artistry is the first salvation.” —Oscar Hijuelos

In To World, poems interrogate everything: nature, society, and thought itself, with no prejudice or even principle. In other words, they don’t follow any rule, tradition, or discipline; they are decidedly critical. Thought is not reduced to philosophical, ethical, religious, political, or aesthetic interpretations. Rather, we are before thought in its totality, unwilling to recognize borders — although never in a pure state, not falling into speculation, into thinking just for thinking’s sake. Thought is always related to ­experience, both personal and collective, and above all, emotion. It never once stops being thought through image, that is to say, lyrical. This poetry speaks of poetry; it takes it all on: the objective and subjective, the real and imagined, I and other. It ventures into virgin territory, on the outskirts of romanticism, realism, symbolism, and the avant-garde. Always a model of rebelliousness and freedom, a lesson in devotion and rigor, Gelman’s work places him among today’s best poets.

West is among the best imaginary poets of America, allegedly his native land, and of all possible lands. His texts, although rich with exceptional life experience, will satisfy those who still believe in “the death of the author.” No less satisfied, in spite of his anti-romanticism, will be those captivated by “committed writing.”

Gelman’s superb text poses a radical question: must human beings in modern society die in order to recuperate their human condition? Something happens after the passing of the book’s thirty-five characters, their absence causes unforeseen consequences, generates certain kinds of presence. This profound questioning of Western assumptions surrounding death requires an innovative form that challenges the traditional boundaries between poetry and narrative, privileges the magical as a vital aspect of reality, and ultimately seeks a redefinition of the lyric persona. In The Poems of Sidney West, writing, without lessening its essential condition of creative practice, is conceived as an instrument not only to interpret but to transform the world.

"A book which adds a new and younger (even younger 20 years ago) perspective on the tragedy of the missing between those who disappeared and those who made them disappear during the 1976-83 dictatorship —the children of the victims as they attempt to explain the inexplicable. Their testimonies do not stand alone but are interspersed with commentary from the likes of the Mothers and Grandmothers of Plaza de Mayo, Horacio Verbitsky of the Centre for Legal and Social Studies (CELS) and late CELS founder Emilio Mignone, as well as lesser-known names from those organisations. A book which achieves the rare combination of avoiding the simplistic slogans into which human rights activists sometimes fall without compromising in any way as to the horrors of state terrorism." Buenos Aires Herald, March 2017