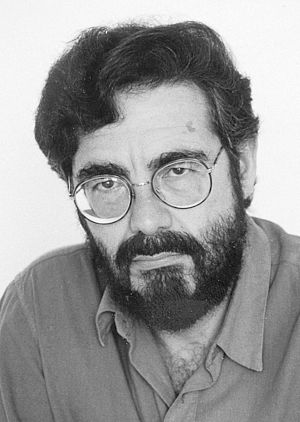 Julián Ríos alternated writing novels and short stories - which were the epitome of cutting-edge fiction in Spanish - with writing essays and “painted novels”, in which words and images, essays and fiction all come together. His best-known work is Larva, an experimental novel that has been the subject of many studies.
During the seventies he was an important publisher: he created and ran the Espiral collection of Fundamentos, a Madrid publishing house. The collection included books by Thomas Pynchon, John Barth and Severo Sarduy. A contributor to various magazines, both Spanish and foreign, he currently lives in France, on the outskirts of Paris.

Mortes is a merchant who arrives in the remote town of Tamoga, on the frontier with Portugal, with the intention of ending his days. Mortes has a past from which he wants to flee, but he is not the only inhabitant of the town in that situation. In Tamoga everyone seems to be hiding a death, a love, an act of revenge, a family grudge. For all of them Tamoga is the place where they can disappear, where they can bury themselves in life, where they can become shadows. Tamoga, which shelters all these lives on the borderline, is yet one more character in the novel, in the same way as Macondo or Comala, a symbol of an entire country and an entire era.

An impressive literary tour de force that condenses all the qualities that have made Julián Ríos one of the most dazzling and disturbing writers of contemporary Spanish narrative.