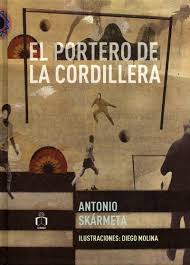 El portero de la cordillera / The Goalkeeper from the Mountains

Books for children and young readers , 2012

Twelve-year-old Silvio leaves Chile with his father, headed for Buenos Aires, where his dad dreams of finding work.

To make friends, he tries playing football with the neighbourhood boys. Silvio proves to be a terrible player, unable to hit the ball with his foot or his head. After being made goalkeeper, he discovers that he’s very good at stopping the ball with his hands. So good, in fact, that he captures the attention of a scout from the San Lorenzo club, and a trial game is arranged for him: the game of his life.