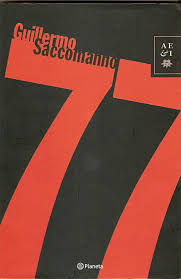 Winner of the 2008 Hammett Award  / Longlisted for Best Translated Book Award 2020: Fiction (US)

Buenos Aires, 1977. In the darkest days of the Videla dictatorship, Gómez, a gay high-school literature teacher, tries to keep a low profile as, one-by-one, his friends and students begin to disappear. When Esteban, one of Gómez’s favorite students, is taken away in a classroom raid, Gómez realizes that no one is safe anymore, and that asking too many questions can have lethal consequences. His life gradually becomes a paranoid, insomniac nightmare that not even his nightly forays into bars and bathhouses in search of anonymous sex can relieve. Things get even more complicated when he takes in two dissidents, putting his life at risk—especially since he’s been having an affair with a homophobic, sadistic cop with ties to the military government. Told mostly in flashbacks thirty years later, 77 is rich in descriptive detail, dream sequences, and even elements of the occult, which build into a haunting novel about absence and the clash between morality and survival when living under a dictatorship.

“A choral, savage, and ruthless work, considered to be the great Argentine social novel.” Europa Press

"77 sings a dark song of one man’s struggle to stay human when the inhumane lurks on every corner and the day-to-day reality of his world is curdled by the struggle between unchecked power and subversive acts." Ross Nervig, Southwest Review

“Cynical and funny: a yarn worthy of a place alongside Cortázar and Donoso.” Kirkus Reviews

“77 is ostensibly a novel about Argentina’s Dirty War; it is also a book about reconciling inaction with survival.” World Literature Today

“77 is a taut historical thriller with noir overtones. . . . As his characters grapple with love, allegiance, and daily life under a dictatorship, every action is a form of resistance.” Foreword Reviews

Saccomanno shines a gruesome, graphic light on what people are willing to ignore so that their comfort remains intact.” Kim Fay, Los Angeles Review of Books

“The novel delves into difficult questions about what's right and wrong, even when bare-knuckle survival is the best you can hope for.” Jeff Somers, B&N Reads

“With western democracies on the descent, it’s not hard to read Saccomanno’s novel as a dystopian warning for the present.”  CrimeReads

"A novel about one of the darkest periods of Argentine history, the so-called Dirty War. A book about reconciling inaction with survival." George Henson, World Literature Today

“77 sings a dark song of one man’s struggle to stay human when the inhumane lurks on every corner and the day-to-day reality of his world is curdled by the struggle between unchecked power and subversive acts.”  Ross Nervig, Southwest Review

“This is a searing, visceral book. A masterpiece.”  Brazos Bookstore, Texas (USA)