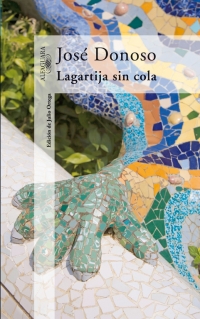 Written as a draft in 1973, set aside, and forgotten, The Lizard’s Tale was discovered among Donoso’s papers at Princeton University by his daughter after his death. Edited for publication by critic and poet Julio Ortega, it was published posthumously in Spanish under the title Lagartija sin cola in 2007.

Defeated and hiding in his Barcelona apartment, painter Antonio Muñoz-Roa—Donoso’s alter ego—relates the story of his flight with Luisa, his cousin, lover, and benefactor, after his scandalous desertion from the “Informalist” movement (a witty reference to a contemporary Spanish art movement and possibly an allusion to the Boom as well), in which he had been a member of a certain standing. Frustrated, old, and alone, the artist looks back on his years in the small town of Dors, a place he unsuccessfully tried to rescue from the crushing advance of modernity, and on the decline of his own family, also threatened by the changing times.