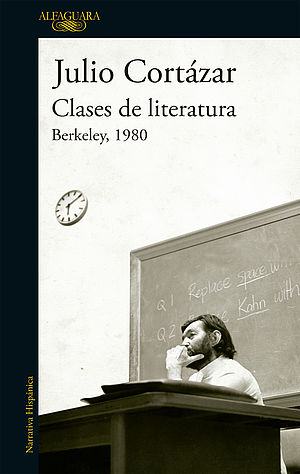 “I want you to know that I’m not a critic or theorist, which means that in my work I look for solutions as problems arise.” So begins the first of eight classes that the great Argentine writer Julio Cortázar delivered at UC Berkeley in 1980. These “classes” are as much reflections on Cortázar’s own writing career as they are about literature and the historical moment in which he lived. Covering such topics as “the writer’s path” (“while my aesthetic world view made me admire writers like Borges, I was able to open my eyes to the language of street slang, lunfardo...”) and “the fantastic” (“unbeknownst to me, the fantastic had become as acceptable, as possible and real, as the fact of eating soup at eight o’clock in the evening”), Literature Class provides the warm and personal experience of sitting in a room with the great author.

As Joaquin Marco stated in El Cultural, “exploring this course is to dive into Cortázar designing his own creations.... Essential for anyone reading or studying Cortázar, cronopio or not!”

“One of those books that radically shifted my thinking about the possibilities of narrative.” Christopher Higgs, Big Other

“Literature Class is a serious boon for Julio Cortázar fans. Delivered at the end of his life while visiting UC Berkeley, these eight lectures offer fresh insights into the mind of one of the 20th Century’s most vital writers.” Jeff Jackson, Fanzine

“The consequent lectures―originally delivered in Spanish and translated adeptly by Katherine Silver―are erudite, intimate, charmingly fragmented, and anecdotal, covering a range of topics, from “Eroticism and Literature” to “The Realistic Short Story.” Dustin Illingworth, The Atlantic

As Cortázar stresses throughout his talks, writing is rarely a pursuit of answers but, rather, about investigation—of the self, of one’s work, and of the world at large. The goal of the novel, Cortázar says, is to harmonize its formal and literal questions into a central, destabilizing quandary: ‘Why are things like they are and not otherwise? The New Yorker

“Based on the words spoken by Cortázar and his students, the class that he taught appears to be an interesting hybrid of Cortázar as tour guide of his body of work, and as mentor into the broader lessons about the qualities of fiction that resonated most with him.” The Culture Trip