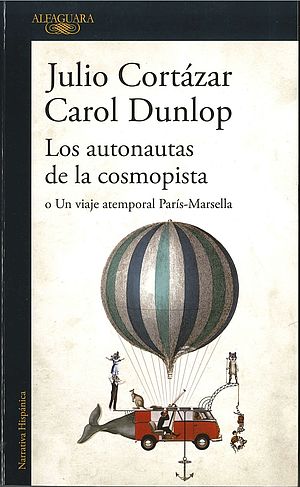 With photographs by Julio Cortázar and Carol Dunlop.

Autonauts of the Cosmoroute is a love story, a travelogue, a collection of stories and snapshots, both visual and verbal, irreverent and brilliant. In May of ‘82, Julio Cortázar, literary explorer of the highest order, set out with Carol Dunlop aboard their VW camper van (a.k.a. Fafner) to explore the uncharted territory of the Paris-Marseilles freeway. It was a route they’d driven before, usually in about ten hours. This time, they loaded up with supplies—food, water, wine, typewriters, cameras—and prepared for an arduous voyage of thirty-three days without leaving the autoroute, at a rate of two rest stops per day. Along the way they would uncover the hidden side of the freeway and take the notion of literature from a serious game to a logical, surreal extreme.

“The journey undertaken by Cortázar and his wife and collaborator Carol Dunlop is quixotic in the largest sense. At one level, it is an adventure stood on its absurd head. At another, it is something graver—a mask of comedy concealing the enigma of an archaic smile.” Richard Eder, The Los Angeles Times Book Review