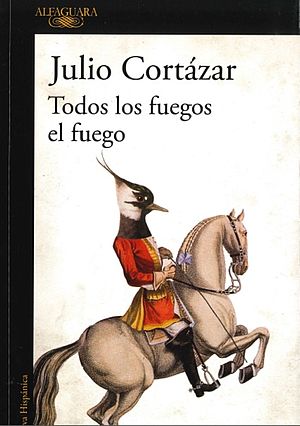 Todos los fuegos el fuego offers eight excellent examples of the full creative power achieved by Cortázar’s stories. From the exasperated metaphor for human relationships that is La autopista del sur (The Southern Thruway) to the mastery of El otro cielo (The Other Heaven), Cortázar again ventures into new territory with stories that are a must-read for his fans and for short story lovers in general: La salud de los enfermos (The Health of the Sick), Reunión (Meeting), La señorita Cora (Miss Cora), La isla a mediodía (The Island at Noon), Instrucciones para John Howell (Instructions for John Howell), Todos los fuegos el fuego (All Fires the Fire). A celebration of intelligence, passion and genius.

Cortázar’s stories are like small time pieces, where each polished part moves relentlessly on its own particular path, exercising a crucial and perpetual influence on the mechanism as a whole. Moments jerk forward and retract, reflect and refract: an island at noon from an aeroplane – an aeroplane at noon from an island; the living deceiving the dying and also themselves, about death; fatality by fire in an ancient Roman arena and in a modern city apartment. It is a world that is constantly shifting, upsetting our balance and our peace of mind, a world outside of time that provokes a fascination bordering on terror. Cortázar is the master of the form and this celebrated collection houses some of his finest work.