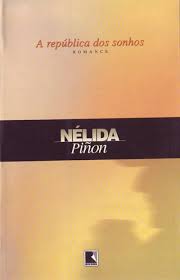 A republica dos sonhos / The Republic of Dreams

This huge, mesmeric novel brings before the reader four generations of a family torn between its Spanish past and its Brazilian present. It is a revelation of the complexities and astonishments not only to a family life but of Brazil itself –a revelation also of the power of storytelling and the nature of dreaming.

As the novel opens, the matriarch Eulália has begun her final task –the task of dying. Long, long ago, when she first came to Brazil from Spain, a young bride with her young and already formidable, iron-willed husband, Madruga, they brought with them the passion, inspired by Grandfather Xan, for making memories into tales --tales told as sustenance, proof, and hallmark, tales told as protection against the killing rush of time. Now, as both Eulália and her era near their end, that tradition achieves its most poignant flowering –in a burst of family lore, recrimination, and recollected dreams, as the clan, gathered at Eulália's side, relives the past and vies for the future.

Madruga –founder of the family in Brazil– is the central figure not only of his own stories but of almost everyone else's, as he is of their lives. His reminiscences have the sweep and drama of history. His authority and –equally despotic– his love have shaped the lives of all his five children. His granddaughter Breta, whom he has chosen as heir to his greatest treasure –his memory– sees the family as "stubbornly programming the life of its members" so as to justify Madruga's desertion, decades before, of their ancestral Spain. His fellow émigré Venâncio –the historian, the dreamer (in counterpoint to Madruga's colonizer-industrialist)– feels unfit to live in the reality forged by men like his old friend.

Through the recollections –unfolding in layers, moving backward and forward across the century– of Madruga and those connected to him by blood or circumstances, a stunning dynastic drama is played out. At the same time, Nélida Piñón's magnificent novel invites us to experience each of its two realms –the new world of Brazil, infatuated with what is to come while longing for what is lost, and the interior world of fantasy, remembrance, and emotion in which we all live– as a republic of dreams

“The Amazonian plenitude of Pinon's imagination puts her in the category of genius.” Publishers Weekly