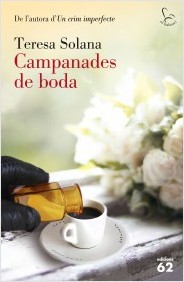 Teresa Solana, the only Catalan author to become a finalist for America’s Edgar Allan Poe prize for mystery novels, resumes her series starring the twin detectives from A Not So Perfect Crime, A Shortcut to Paradise and The Sound of One Hand Killing.

Although they seem like polar opposites, Eduard and Borja are brothers, twins and partners. One is left-wing, sensible and conventional. The other is a right-wing, shameless social climber. Together as detectives, their partnership is as eccentric and impossible as it is effective.In this new adventure, they investigate the murder of a bride’s father, poisoned with polonium during the wedding banquet. However, the detectives suspect that the murderer was after a more ambitious target: the groom’s father, a multimillionaire American investor, or the President of the Generalitat of Catalonia, another guest at the unfortunate celebration.

“Full of murder and mayhem, but also packed full of humour and acute observation…” Oxford Times

“The Catalan writer Teresa Solana may have invented a new variation of the traditional private eye partnership. Her heroes, Borja and Eduard, are twins who don’t look at all alike, have different surnames (one of them is a fake) and are farcically inefficient at their job. Solana’s Barcelona is exciting, sexy and louche, the city’s literary scene and the people who inhabit it portrayed with satirical Charming and great fun.” The Times

“I hope Solana keeps up this wonderful series: further comic and criminal forays into Barcelona life, and further installments in the brothers' lives  would be most welcome.” International Noir Fiction

“Solana's second novel made me laugh so much the tears soon rolled. She shoots from the hip at the guardians of culture…” El País