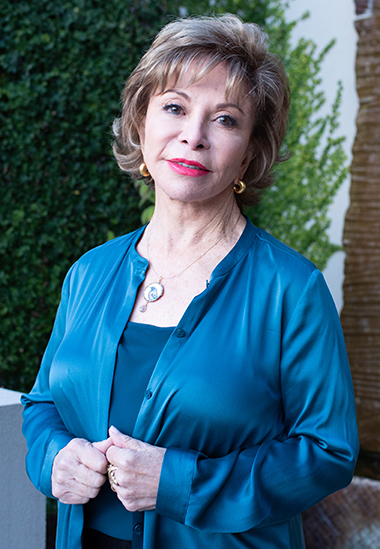 Isabel Allende (Lima, Peru, August 2nd, 1942) has been awarded the Barcino Historical Novel International Prize by the Barcelona City Council. The ceremony will take place at the Saló de Cent during the ‘Barcelona Historical Novel’ festival, which will be held between November 4th and 10th, 2019.

The jury, comprised of the journalists Oscar López and Sergi Doria; the writers Care Santos and Enric Calpena; and the commissioner of ‘Barcelona Historical Novel’, Félix Riera, emphasizes that Allende "embodies the personal implications of the time period that she has had to live”. Pinochet’s coup d’état on September 11th, 1973, forced her into exile. Of all the things that she took with her, she kept an intangible treasure: the memory of the place where she was born, The House of the Spirits. Night after night, she transformed family members into characters and witnesses of the story in her novel. Struck by the Chilean drama, she reflected in Of Love and Shadow a Latin America caught up in dictatorships. Allende's commitment to the historical genre has been revalidated in titles such as Daughter of the Fortune, a vindication of the feminine outlook on the California gold fever that she also applied to nineteenth-century Chile in Portrait in Sepia. History has once again become the main subject of her most recent novel, Long Petal of Sea, a story about the transatlantic journey that the poet Pablo Neruda organized on board of the Winnipeg so that 2,200 Spaniards could get to Chile and thus recover an existence interrupted by the civil war. Exiles and personal experiences that go from love to death; this is the perfect equation to create novels that move readers because of their human radicalism. Isabel Allende feels what she writes. Seventy million readers around the world know that.

Her work, comprised by 23 published titles, translated into 42 languages ​​and with more than 74 million copies sold, has made Isabel Allende the number one bestseller writer in the Spanish language. She has received more than 60 international awards, including the National Prize for Literature of Chile, in 2010; the Hans Christian Andersen Award from Denmark, in 2012, for the trilogy Memories of the Eagle and the Jaguar; and the Medal of Freedom, the highest civil Distinction in the United States, in 2014. In 2018, Isabel Allende became the first Spanish-language writer to receive the National Book Award, in the United States, for her outstanding contributions to the world of literature.

The Barcino Historical Novel International Prize is awarded within the framework of the literary contest Barcelona Historical Novel, which celebrate its seventh edition this year. Other writers such as Lindsey Davis, Santiago Posteguillo, Simon Scarrow, Christian Jacq, Arturo Pérez-Reverte and Leonardo Padura have received this award.

Barcelona Historical Novel is organized by the Institute of Culture of Barcelona with the collaboration of several publishers and bookstores.