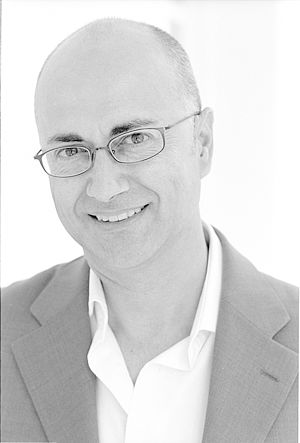 Antonio Garrido studied industrial engineering at the Polytechnic University of Las Palmas. He is a professor at the Cardenal Herrera-Ceu University of Valencia and the director of a master’s course on vehicle styling and concept at the vocational training centre of the Polytechnic University of Valencia. His first novel, La escriba, found immediate international success and was translated into many languages. Among other awards, his novel El lector de cadáveres earned him the Premio Internacional Ciudad de Zaragoza for the best historical novel published in Spain. In June 2013, this novel became the number one bestseller in all genres on Amazon, something never achieved before by a Spanish author.

In mid-19th century industrial London, Rick Hunter is a bounty hunter who makes his living selling to the highest bidder, motivated by a dark thirst for vengeance. After escaping a deadly ambush, a strange clue takes him to the exclusive florist shop, Passion of the East, whose proprietress is an expert in the language of flowers. Her powerful, aristocratic clients go to her eager to discreetly communicate their secret passions through messages encoded in the composition of floral centrepieces.

After his grandfather dies, avid scholar and budding forensic investigator Cí Song begrudgingly gives up his studies to help his family. But when another tragedy strikes, he’s forced to run and also deemed a fugitive. Dishonored, he has no choice but to accept work as a lowly gravedigger, a position that allows him to sharpen his corpse-reading skills. Soon, he can deduce whether a person killed himself—or was murdered.

His prowess earns him notoriety, and Cí receives orders to unearth the perpetrator of a horrific series of mutilations and deaths at the Imperial Court. Cí’s gruesome investigation quickly grows complicated thanks to old loyalties and the presence of an alluring, enigmatic woman. But he remains driven by his passion for truth—especially once the killings threaten to take down the Emperor himself.

Inspired by Song Cí, considered to be the founding father of CSI-style forensic science, this harrowing novel set during the thirteenth-century Tsong Dynasty draws readers into a multilayered, ingenious plot as disturbing as it is fascinating.

“Antonio Garrido's The Corpse Reader deserves to be called epic. It also deserves a space on the list of great adventure novels right next to Jerzy Kosinki's The Painted Bird and Mark Twain's The Adventures of Huckleberry Finn.” Horror Talk

“Each successive chapter climaxes in a precarious cliff-hanger from which Song must extricate himself—only to confront an even greater challenge.” The Japan Times

“This novel is exceptional in so many different ways… If you are into forensic sciences, this is a must read… History buffs… also a must-read! For those who enjoy a good forensic science suspense thriller, this will easily fulfill your interests. Highly Recommended!” Book Reader's Heaven

“The Corpse Reader is a refreshing break from the urban-noir fetish that is so common in conventional thrillers and crime books. It’s a great novel to add to a summer reading list.” Ars Technica