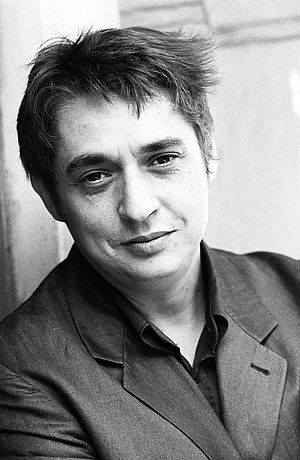 Francisco Casavella embarked on various university degrees and careers from a young age before deciding to dedicate himself to literature in the early 1980s. His real name was Francisco García Hortelano. His first novel, El triunfo, was awarded the Premio Tigre Juan, receiving praise from critics as a young writer with a great deal of promise. The trilogy El día del Watusi, his most ambitious work, paints a bitter picture of Spain during the Transition. A regular contributor to the newspaper El País, he also wrote the script for the film Antártida (1995), directed by Manuel Huerga. He was awarded the Premio Nadal in 2008 for Lo que sé de los vampiros, the last novel that he published. He died of a heart attack the same year. In 2010, the publishing house Ediciones Destino created the literary prize Premio de novela Francisco Casavella in his honour, replacing the category of “finalist” in the Premio Nadal.

In his first novel, El Triunfo (awarded the Tigre Juan Prize, adapted for the cinema by Mireia Ros in 2006, recovered by Anagrama and now transformed into a classic in this Cátedra edition), Casavella reinvents hero literature with an audacity and vitality that flees from boredom at all times. El Triunfo is a game of cards in which the die is already cast, the story of a time that has already changed. One generation is affirmed over the other, and youth can only survive by devouring the power and control of old age.

Prematurely deceased, Casavella is a cult figure among the Spanish authors of the 21st century.

Barcelona, 1995: Fernando Atienza, an ageing and somewhat comical careerist, is commissioned to write a confidential report about one of those obscure characters who indistinctly frequent the pages of court cases and the society columns of the newspapers. In a context marked by the dissolution of democracy due to political and financial scandals and a series of small and large concessions, Atienza prepares to review the history of his city and his country. But also his own life.

First published in three volumes between 2002 and 2003, El día del Watusi marked the consecration of Francisco Casavella as one of the finest literary talents in the Spanish language.

“One of the most talented fiction writers of his generation.” Juan Marsé

“A luxury for our literature." José María Pozuelo Yvancos, ABC

“With this work, Casavella establishes a strong position among the storytellers that make his novels essential. Without them, the world would be a poorer place; it would have less truth in it.” Enrique Turpín, El Periódico

“El día del Watusi represents the full validation of this author. With time, he will acquire the weight solely reserved for those books that are a brilliant and enduring reference for subsequent works.” Jesús Martínez Gómez, Quimera

“What Casavella achieves in his heroic literature is the revelation of secrets that tell the story of a Barcelona whose existence has been wholly rejected.” Javier Pérez Andújar, El País

“A novel whose beginning is inspired by rumour and the ease with which Casavella is able to capture an oral saga, and culminates in a conspiratory world reminiscent of today’s.” Jordi Costa, El País

“The perfect antidote to the worst of diseases a society can suffer: self-importance. We believe that we are before the novel of the transition itself.” Andrés Pau, Levante

“El día del Watusi is the stark portrait of one of the years that everyone wishes to sweep under the carpet of memory. Only those excluded from history, those who always lose the battles, may appropriate the ‘W’ for Watusi that hovers over the novel.” Joan Riambau, L’Avenç