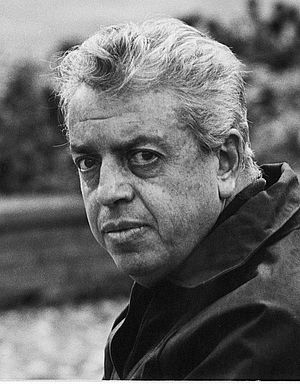 Jorge Ibargüengoitia left his engineering degree to study humanities, graduating as a teacher with a drama specialisation. Having written 17 works for the theatre, but discouraged by his lack of success in the genre, he decided to swap drama for prose writing, becoming one of the most important Mexican novelists of his generation. Characterised by a refined sarcasm and highly critical edge, his theatre works have since led to his being considered one of today’s most valuable and brilliant dramatists. He is equally well-regarded for his novels, short stories and journalism.

In the manner of Roald Dahl, and with exquisite language, Jorge Ibargüengoitia offers us stories with unexpected endings and mischievous, eccentric characters who question authority...

Los pasos de López is the last novel of Jorge Ibargüengoitia and was originally published in Spain under the name of Los conspiradores.

"Los conspiradores tells the first story that interested me in my life," says Jorge Ibergüengoitia. "It's the history of the conspiracy with which began the independence of Mexico, and that they told me as a story at the age of six and fascinated me. Then I studied it at school and got bored, because the heroes bore me. At last I did a play, quite heroic too, and I ended up writing this novel. " A novel against history, because "history", he says, "makes things stiff."

Set against a backdrop of political repression, secret police, informants, and maddening bureaucracy, this is the story of two Mexico City murders and how they are solved.

The Dead Girls is the discovery of these young women, buried in the back yard. In the laconic tones of a police report, Jorge Ibargüengoitia investigates these horrific murders and their motives.

A black comedy, both moving and cruelly funny, Ibargüengoitia’s work is a potent and entertaining blend of sex and mayhem.

"Cynical madams, corrupt soldiers, cheapjack politicians, violent crimes, bodies in the back yard... The Dead Girls is a startlingly good book by an author of genuine, exciting originality"–Shalman Rushdie

After four long presidential mandates, the tyrant of the small Caribbean island of Arepa plans to remain in office for life. The ranks of the opposition, increasingly relegated and with less power, will end up posing an extreme solution: we have to end with the president no matter what it costs. Of course, it will not be easy.

Major General Lupe Arroyo prided himself on being a man of integrity. Not above stealing or killing or extortion or betrayal. But truthful about it, because all he did was for the glory of the revolution (or, when necessary, to save his own neck).

The year is 1928; the country is Mexico; and the revolution about to take place becomes, in the general's account, an uproarious farce of allegiances changing places as fast as musical chairs, of battles won by bumbling, of power grabbed at any cost. Bust as his tale begins to reflect an unmistakable reality, our laughter at Jorge Ibargüengoitia's masterful mock epic suddenly catches in the throat--for this is political truth that penetrates our heart with the sureness of a stiletto.

The play is about the events that preceded 'The Cry of Dolores' and reflects "fears and errors" of those historical personalities known as heroes of Mexican independence.

The life of a family at the moment when the patriarch dies. A swarm of generations surrounds him. Humor, deceit and melancholy are there. The look of Ibargüengoitia is ironic, impertinent, fierce at times, but never contemptuous.

A couple comes back from their hasty and hidden honeymoon, to cope with the difficulties of the true marriage problems, the family and the past. Comedy in three acts that portrays the Mexico of the sixties, its traditionalism, and a city that already threatened to be a dangerous place where to live.

Work with which the author entered into the literary panorama, written in 1953 and released a year later.  It deals with the universal theme of love and the transit to the maturity of a group of young people.

This volume includes 23 of the 31 articles that Ibargüengoitia published in the University Magazine, in the course of three and a half years, about Mexican theatre.

The more than one hundred articles that Ideas en venta brings together, reveal the reason of the author when he affirmed: "To me these ideas make me laugh, but it is because I was badly educated." With irony in the content and lightness in form, Jorge Ibargüengoitia animated from 1968 to 1976 the editorial pages of Excélsior. In this period, the novelist dealt with issues ranging from individual pleasures - writing, travel and film passion - to matters of collective order - corruption, urban disorder, the arrival of man to the moon - without tempering his fierce and sarcastic vision.

Almost a hundred texts published by Jorge Ibargüengoitia from 1968 to 1976 in the editorial pages of the newspaper Excélsior. The author writes with sarcasm about the elections, the costs of education in Mexico, the singularities of commerce, football and political intolerance.

Selection of articles Jorge Ibarguengoita wrote for the newspaper Excélsior, from 1969 to 1976. Although he is most of the time the one directly affected by the misadventures of the bureaucracy, the failures of the public services, and so on, he has the ability to look at these avatars with distance and sense of humor.

La casa de usted y otros viajes is the last of the three volumes in which Guillermo Sheridan grouped the journalistic work of Ibargüengoitia. As in the two previous ones (Autopsias rápidas and Instrucciones para vivir en México), the topics concerning life in Mexico City, journeys inside the Mexican Republic and abroad, and what social scientists called "Agrarian question"; No doubt these journeys will make us discover corners, cities and continents both geographical and literary.

In the manner of Roald Dahl, and with exquisite language, Jorge Ibargüengoitia offers us stories with unexpected endings and mischievous, eccentric characters who question authority. Among the characters living on these pages, there are magicians, frogs, villagers and mice, but also stuck-up girls and boys, swindlers, gangsters and millionaires. These stories are for intelligent, clever, ironic, fun kids who distrust stories with morals. Kids who, given the choice, might prefer the Big Bad Wolf to Little Red Riding Hood.

"Ibargüengoitia turned to laughter as the supreme court of intelligence.” Juan Villoro

“Ibargüengoitia is a children’s story writer ahead of his time, someone for whom laughter, dark humour and joking remain in the memory of future readers.” M.C. Sánchez Ambriz, Nexos, Mexico

"One of the Mexican writers with the most personality of the second half of the 20th century." Qué leer

Tireless pilgrim, Ibargüengoitia tried to keep in his travels two constants: to avoid a tourist attitude and to describe, instead, the small but not insignificant details of his entourage. It begins in Mexico City, departs towards the province and expands with his observations on Spain, England and Egypt.

"This book, whose title evokes a nautical disaster, is a rescue effort: of a childhood in the thirties, of a play that was never premiered, and of a series of articles which originally appeared in Excelsior - that in my opinion, deserve to be presented again, in the perspective of a book. " Jorge Ibargüengoitia, 1974