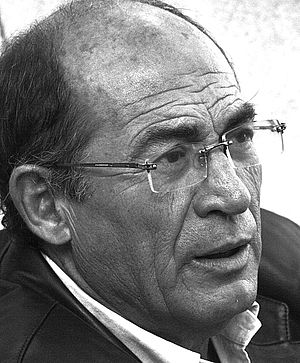 Juan Madrid holds a degree in contemporary history from the University of Salamanca, and works as an investigative journalist and columnist, a profession in which he has forged a solid reputation. Since the 1980s, he has produced some 30 literary works, and is one of the best-known crime writers in Spain today. The creator of the skilfully depicted character Toni Romano, who is the star of a long series of novels, Juan Madrid has also written essays and scripts for cinema and television, as well as teaching on courses on prose and scriptwriting in various centres in Spain and Hispanic America. He is the author of the television series Brigada central, and he also directed the films Tánger (2004), based on one of his books, and La carretera de la muerte (2007).

Meanwhile, Juan Delforo is documenting a new book, an investigation into the menace of the communism in the 20th century, and he gets a closer look at characters whose "undercover activities" led to actions that official history records in a very different way. No public event seems to be safe from the interference of the parallel structures of the State or power. Whatever the power.

Is this an imaginary portrait of a country that is rotten to the core or fictional confirmation of our worst suspicions?

With real flesh and blood characters, intelligent dialogue and an impeccable treatment of the timing and action, Juan Madrid deals with known and suspected realities in Gloria bendita, but also with fiction as "the only great truth", despite everything the only truth capable of “describing the world”.

“Juan Madrid, one of the founders of the Spanish crime novel (…). An author who uses crime fiction as a tool to explain what happens in the city streets, with the characters who live in them telling their own stories. And their anger, hope, good or bad luck, the injustice, and the moral codes of the victors and the defeated that Juan Madrid brings to life in his novels also tell us the story of our own everyday lives.” Extract from the conclusions of the jury of the 2020 Pepe Carvalho Prize

March 1914; With an old photograph and a letter, Salvador travels from Spain to Mexico in search of his father, an artillery officer who fights with Pancho Villa. His search becomes a succession of exciting adventures that force him first to fight with the federals, and finally to join the Villistas.