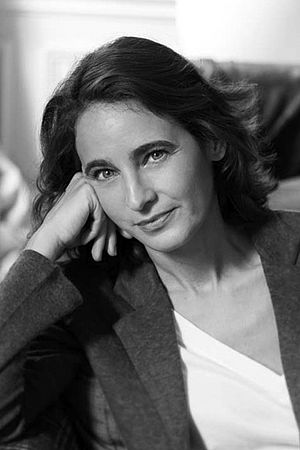 Laurence Debray grew up in France and Spain. Daughter of the French philosopher Régis Debray and the Venezuelan anthropologist Elizabeth Burgos, at the age of 10 she was sent to a youth camp in Cuba. She studied history and literature at the Sorbonne, and at the London School of Economics, and economics at the HEC business school in Paris. The time she spent in Sevilla stimulated her interest in the Spanish transition and the figure of King Juan Carlos and resulted in the book Juan Carlos d'Espagne (Juan Carlos of Spain). Her second book, Fille de révolutionnaires (Daughter of Revolutionaries), won the Prix du Livre Politique, the Prix des Députés and the Prix Étudiant du Livre Politique-France Culture In 2018.

The daughter of Régis Debray and Elizabeth Burgos recounts the life of her revolutionary parents in a narrative that moves between her personal memories and a portrait of troubled times.

Laurence Debray is the daughter of the philosopher Régis Debray and the anthropologist Elizabeth Burgos. Her parents came from traditional, well-off families – his from Paris and hers from Venezuela - and both embraced the revolutionary cause of Fidel Castro and Che Guevara. In 1967 Régis Debray joined Che's guerrilla army in Bolivia as a liaison agent and was arrested. When Che was captured six months later, Debray was accused of having betrayed him and sentenced to thirty years in prison, of which he served only four thanks to the good offices of his family and the French diplomatic corps, and the pressure exerted by the Bolivian trade unions. Then came years of bohemian life, when he took refuge in writing. Later, with the coming to power of Mitterrand, both the author’s parents were appointed to public office: Debray served as an adviser to the president and Burgos was director of the Maison de l'Amérique Latin.

In this frank, sincere book, Laurence Debray settles accounts with the past and describes the legend and real lives of her revolutionary progenitors, and her own life too. And thus the stage is filled by the absent father, the mother who chose to be free rather than ending up trapped in the role of the wife of a staunch intellectual, the author’s lonely, austere childhood in Paris, the summer she spent in Cuba in a communist youth camp devoted to the training of perfect revolutionaries, her stay in Seville, where Alfonso Guerra became her adoptive father, and later the time spent in Venezuela, London and the world of banking in New York.

The author smoothly combines the gaze of a daughter examining her parents with a critical eye, the unbridled sincerity of her most intimate memories, and the detached perspective of a historian reviewing a time of revolutionary zeal, all written in line with the hard-hitting maxim in Molière’s The Misanthrope, which introduces this dazzling autobiography and eyewitness account: “The more you love someone, the less you should flatter them. The proof of true love is to be unsparing in fault-finding.”

“With a historian’s detachment and a daughter’s curiosity, one generation’s perception of the previous one.” France Culture

“A family portrait of an atypical childhood in the shadow of communist parents.” Le Figaro

“In this story, which is both personal and historical, the author explores the lives of her parents.” Roxane Grolleau, Le Monde

“A book about the lives of her parents. Sometimes tender, often fierce. And it makes no concessions.” Serge Raffy, Le Nouvel Observateur

“Once upon a time there was a prince. Who from being young and charming became an outcast. His name was Juan Carlos, or Juanito to his close friends. In fact, he wasn't exactly a prince, he was the grandson of a king. But a king without a kingdom, forced into exile. His real country, the one over which his Bourbon ancestors had ruled for three centuries, was Spain."

In 1969, after 40 years of dictatorial power, Franco nominated Juan Carlos, this docile thirty-year-old playboy, this dutiful soldier, as his successor. But against all the odds, our colourless prince became a political animal, transformed the face of Spain, saved it from a coup d’état in 1981, and guaranteed democratic stability. By dint of duplicity and collusion, tears and triumphs. Because behind the political success story and the charisma lie the personal tragedies. Handed over as a child to the enemy Franco, shunted back and forth between two ruthless father figures, indirectly responsible for the accidental death of his younger brother, usurper of his father’s throne... a heavy price to pay, which was carefully covered up. Shakespeare couldn't have done it better. And the final banishment is the culmination of all this.”

What could possibly bring together a “daughter of revolutionaries” and a king? Although it may seem implausible, after spending her teens in Spain Laurence Debray became interested in Juan Carlos I as a historian, wrote his biography and interviewed him on the eve of his abdication, in 2014, for a TV documentary. Since then, she has kept in contact with him, following the twists and turns of his fate. And she visited him in 2021, in Abu Dhabi, where he took refuge following a series of scandals, having become a pariah in his own country and an excessively troublesome father for King Felipe VI.

Laurence Debray’s account of this unusual relationship fascinates for its virtuosity, its intelligent understanding of the circumstances, and its lucidity when the past is confronted with the present.

Laurence Debray analyses the historical keys to the monarch’s life from his childhood to his abdication in favour of his son King Felipe VI. And she makes it entertaining, letting it read like a novel. This is a no-holds-barred biography with no signs of deference, which highlights the brighter side without neglecting the shady areas. A thorough, objective and exact biography whose finishing touch is the author’s interview with King Juan Carlos and the then Prince Felipe shortly before the former’s abdication.

Juan Carlos d'Espagne is the fruit of years of research around the figure of the king by French historian Laurence Debray. Years of delving through public and private archives and interviewing, apart from the monarch himself, politicians, journalists and figures from Spanish cultural and social life, close or not so close to the king's inner circle, which have resulted in a biography that also relates the recent history of Spain.