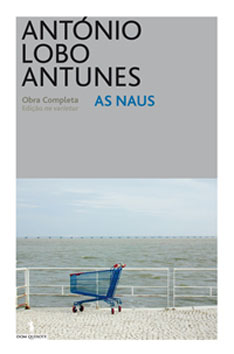 As naus / The Return of the Caravels

The Return of the Caravels  is a powerful indictment of Portuguese colonialism and another literary tour de force from the pen of Antonio Lobo Antunes, "the greatest living Portuguese writer" (Vogue). It is set in Lisbon as Portugal's African colonies gain their independence in the mid-1970s. In a contemporary response to Camoes's conquest epic The Lusiads, Antunes imagines Vasco da Gama and other heroes of Portuguese explorations beached amid the detritus of the empire's collapse. Or is it the modern colonials –with their mixed-race heritage and uneasy place in the "fatherland"– who have somehow ended up in sixteenth-century Lisbon? As da Gama begins winning back ownership of Lisbon piece by piece in crooked card games, four hundred years of Portuguese history mingle –the caravels dock next to Iraqi oil tankers, and the slave trade rubs shoulders with the duty-free shops. The Return of the Caravels is a startling and uncompromising look at one of Europe's great colonial powers, and how the era of conquest reshaped not just Portugal but the world.

"... the voice of Nabokov by way of Cortazar, Gogol by way of Dylan." -- Jonathan Levi, Los Angeles Times Book Review "Antunes has empathy for the contradictions of human feeling. He is a warm-bloodied writer." Michael Pye, The New York Times Book Review