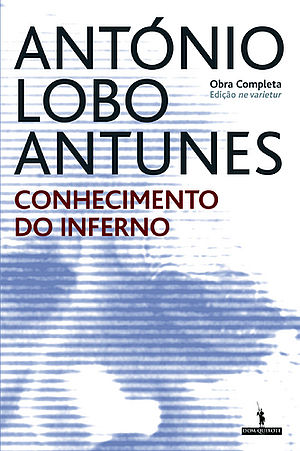 Conhecimento do Inferno / Knowledge of Hell

Like his creator, the narrator of this novel is a psychiatrist who loathes psychiatry, a veteran of the despised 1970s colonial war waged by Portugal against Angola, a survivor of a failed marriage, and a man seeking meaning in an uncaring and venal society. The reader joins Antunes on a journey both real and phantasmagorical as he travels by car from a vacation in the Algarve back to his hated work as a psychiatrist at a Lisbon mental institution. In the course of one long day and evening, he carries on an imaginary conversation with his daughter Joanna, observes with surreal vision the bleak countryside of his nation, recalls the horrors of his involuntary role in the suppression of Angolan independence, and curses the charlatanism of contemporary psychiatric "advances" that destroy rather than heal.