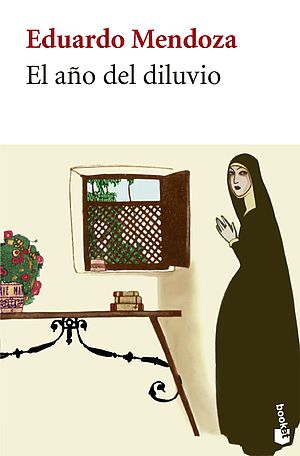 El año del diluvio / The Year of the Flood

Sister Consuelo had a perfectly innocent reason for going to call on Augusto Aixel, the rich landowner who lived up the hill from her convent: As Mother Superior, she was in charge of the hospital run by the sisters, and needed funds to start an Old People's Home –social provision in Franco's Spain left a great deal to charity. How a possibly too vigorous squire and an apparently self-possessed Mother Superior became involved in what others might term the baser passions, one sultry summer's afternoon, is the substance of this story. Chance enters the tale in the shape of some bandits who abduct the lady that same night as she is on her way to meet her lover. A misunderstanding between the parties results, which is destined never to be resolved –but neither is the nun's misunderstanding with her religious order.

As in all Eduardo Mendoza's novels, so in The Year of the Flood, the touch is light, the humor a gentle undercurrent; but the true meaning and beauty that will strike the reader lies in the delicate description of two mature people who are a mystery, indeed an affront, to each other, who resort to feints and evasions in order to preserve an inner integrity that must ultimately be violated.