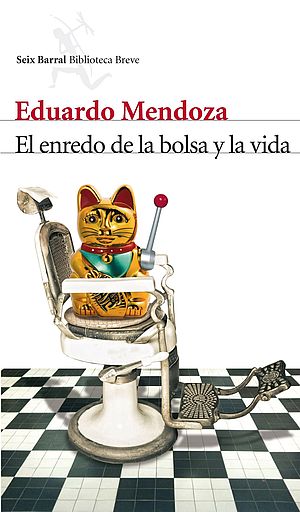 The hilarious return of the detective from The Mystery of the Enchanted Crypt, The Olive Labyrinth and The Adventure of the Powder Room. Our hero’s life has not escaped the effects of the recession. Nobody ever comes into his hair salon, and if he ever gets a hot meal, it’s a favour from the Chinese people from the bazaar across the street. His peaceful existence comes to an end when he learns of the mysterious disappearance of Romulus the Handsome, a former fellow inmate from the mental asylum. With no clues or money for a proper investigation, our detective manages to call up characters from the streets of Barcelona: a living statue from Las Ramblas, a pizza delivery guy, a thieving female accordionist, and a teenage girl he tries to educate. What no one expects is for their missing friend to be involved in an international terrorist plot: nothing more, and nothing less, than the organisation of an attack against the German chancellor, who is about to visit the city.