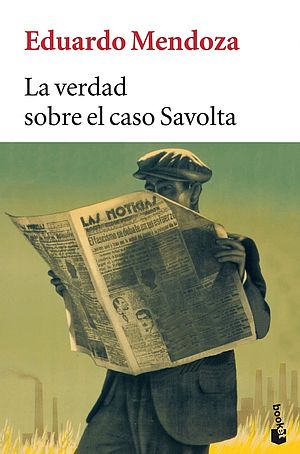 During a period of political neutrality (Barcelona, 1917-1919), an armaments company headed for economic disaster due to labour conflicts serves as the backdrop for this story recounted by Javier Miranda, the protagonist and narrator. The Catalan industrialist Savolta, owner of a business that sold arms to the Allies during World War I, is murdered. Mendoza’s use of humour, irony, a richness of nuances and experiences, parody, satire, the revival of the narrative tradition of the Byzantine and Picaresque novels, books of chivalry, and even the modern detective story make The Truth About the Savolta Case an intelligent and entertaining tragicomedy. With this book, Eduardo Mendoza became one of the most prominent contemporary storytellers in the Spanish-speaking world.

Forty years after its publication, The Truth About the Savolta Case recovers its original censored title. The commemorative edition includes the censorship reports, countered by the words of Juan García Hortelano, Manuel Vázquez Montalbán, Félix de Azúa and Eduardo Mendoza himself, who discuss the relevance of this novel, an intelligent and entertaining tragicomedy that marked the beginning of democracy in Spain and the end of Francoism.

"The Truth About the Savolta Case became a milestone, a revelation, a great success; it was an outstanding innovation, and that’s why they say that it marked the beginning of democracy and the death of Francoism in literature." Javier Marías

"The Truth About the Savolta Case brought new life to the way novels were written and read in Spain." Antonio Muñoz Molina

"From the time The Truth About the Savolta Case was published in 1975 to the present day, I would say that one of the most pronounced and significant features of Eduardo Mendoza’s novels is an exemplary, light-hearted and highly stimulating freedom in his approach to and treatment of diverse genres and literary tendencies."Juan Marsé