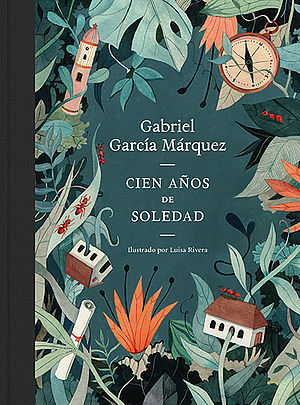 A commemorative edition of a key novel in the history of literature.

On the occasion of the 50th anniversary of the publication of One Hundred Years of Solitude comes an edition containing unpublished illustrations by Chilean artist Luisa Rivera, with a typography created by Gabriel García Márquez’s son, Gonzalo García Barcha.

“Many years later, as he faced the firing squad, Coronel Aureliano Buendía was to remember that distant afternoon when his father took him to discover ice.” Thus begins one of the most important novels of the 20th century, and one of the most fascinating literary adventures of all time. Millions of copies of One Hundred Years of Solitude, read in every language, and a Nobel Prize for Literature have crowned a work that made its way “from mouth to mouth,” as its author liked to say. This is the most palpable proof that the fabulous adventure of the Buendía-Iguarán family, with its miracles, fantasies, obsessions, tragedies, incest, adultery, rebellions, discoveries and imprisonments, simultaneously represented the myth and the history, the tragedy and the love, of the entire world.