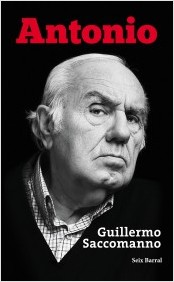 Antonio Dal Masetto, one of the greatest Argentine writers, died in 2015. Shortly thereafter, his friend, Guillermo Saccomanno, composed a story that reads like a requiem. He recounts Antonio’s childhood in Piedmont, World War II, Nazism and resistance in the Pavese region. Then came rootlessness, a village in the Argentine countryside, youth, initiation through his first novel reflecting Patagonia and the city, territories to be conquered. The bars in the El Bajo district, journalism and women, fatherhood and guilt, the unexpected loss of Briante and Soriano. Even after receiving literary recognition, Antonio held himself apart, solitary. His works are based on a luminous idea: a book should be like a walnut tree. As he fine-tuned his storytelling technique, he struggled with the perils of alcohol. During his last year, he sent Saccomanno the chapters of what would become his posthumous novel, which he would finish days before his death.
As he grieves, Saccomanno racks his brain to find the key moments in a relationship marked by books that comprise a style. As poetic art, Antonio is a unique text that evokes Dal Masetto and his art of living, and brings it into the present.

Testimony of the deep friendship between two writers from different generations, who shared a common language.