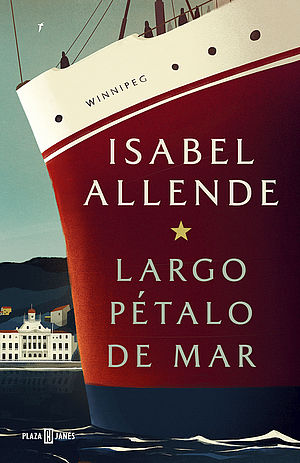 Largo pétalo de mar / A Long Petal of the Sea

A masterful work of historical fiction that soars from the Spanish Civil War to the rise and fall of Pinochet, A Long Petal of the Sea is Isabel Allende at the height of her powers.

In the late 1930s, civil war grips Spain. When General Franco and his Fascists succeed in overthrowing the government, hundreds of thousands are forced to flee in a treacherous journey over the mountains to the French border. Among them is Roser, a pregnant young widow, who finds her life intertwined with that of Victor Dalmau, an army doctor and the brother of her deceased love. In order to survive, the two must unite in a marriage neither of them desires.

Together with two thousand other refugees, they embark on the SS Winnipeg, a ship chartered by the poet Pablo Neruda, to Chile: "the long petal of sea and wine and snow"; As unlikely partners, they embrace exile as the rest of Europe erupts in world war. Starting over on a new continent, their trials are just beginning, and over the course of their lives, they will face trial after trial. But they will also find joy as they patiently await the day when they will be exiles no more. Through it all, their hope of returning to Spain keeps them going. Destined to witness the battle between freedom and repression as it plays out across the world, Roser and Victor will find that home might have been closer than they thought all along.

"One of the strongest and most affecting works in Allende's long career." New York Times Book Review

"A defiantly warm and funny novel, by somebody who has earned the right to argue that love and optimism can survive whatever history might throw at us." Daily Telegraph

"An epic that starts in 1939 and spans decades and continents . . . A masterful work of historical fiction about hope, exile and belonging, and one that sheds light on the way we live now." Independent.co.uk

"Allende's style is impressively Olympian and the payoff is remarkable." Guardian

“Allende has everything it takes: the ear, the eye, the mind, the heart, the all-encompassing humanity”  New York Times

“Isabel Allende is a grand storyteller who writes with surpassing compassion and insight. Her place as an icon of world literature was secured long ago. She will be celebrated, by readers and writers alike, for generations to come.” Khaled Hosseini

“A historical saga that sweeps from the Spanish Civil War to the rise and fall of General Pinochet.” Highlights for 2020, Daily Telegraph

“Although this is fiction, Allende's epic is deeply rooted in fact, and often reads like a biography – of her homeland not least . . . [The characters] are brought alive by Allende's generous imagination and brisk, vivid prose.” Daily Mail