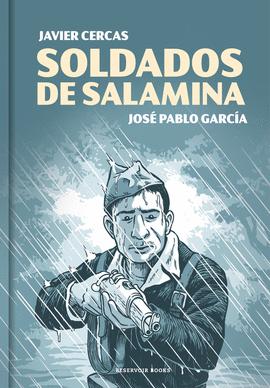 The new edition of Soldiers of Salamis, an essential novel of the 21st century, thoroughly revised by the author and topped by an illuminating epilogue written by himself.

The graphic edition of an essential novel in the Spanish narrative. Towards the end of the civil war there was, close to the border with France, a shooting of prisoners from the Franco dictatorship. One of them made it out alive, thanks to a young republican soldier, and he was able to take refuge in the forest. It was Rafael Sánchez Mazas, a poet, the founder of the Falange and the future minister of Franco. Sixty years later, a novelist, who is in a very low point in his life, unearths this war episode and, fascinated by it, intends to investigate and clarify its circumstances. Soldiers of Salamis, Javier Cercas's novel originally published in 2001, has been hailed as a modern classic  by, among others, Kenzaburo Oé, Susan Sontag, George Steiner or Mario Vargas Llosa. We present now a meticulous graphic adaptation Illustrated by Jose Pablo García, one of the Spanish comics authors with more international projection.