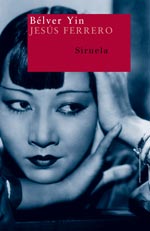 China. 1930. Nytia Yang and Bélver Yin are twins who, united by a marvellous sensual attraction, conceive of themselves as one individual, an indivisible being aspiring to single, total realisation. They both belong to the White Lotus sect, a Taoist organisation that defends the aesthetic and spiritual purity of China against foreign domination. After her first marriage of convenience to Christopher, a British trader, Nytia’s hunger for power and cold games of seduction will lead this story down dangerous paths of fidelity and betrayal. These life engines are united by a cold, calculated balance that Nytia will never give up, and will destroy everything in their path. Written like a game of mirrors, Bélver Yin is an existential investigation of gender and identity that is sketched, suggested in images and prints. First published in 1981 and unusually lyrical and poetic, this first novel by Jesús Ferrero (City of Barcelona Prize) is more malignant and mysterious today than ever. Its classic, surprisingly mature style, full of references to mythology, is nothing more than a beautiful shell enveloping a poisoned fruit, through which readers will delve into their deepest, most sensual selves, their dark sides, female and male, and their own lives understood as adventure and risk.