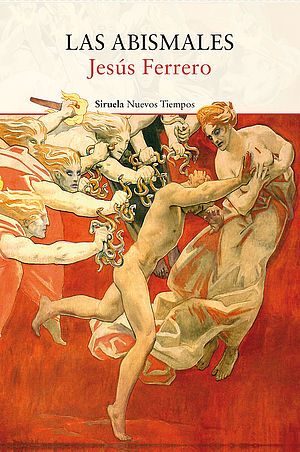 Las abismales / The Abyssal Ones

The Abyssal Ones reflects upon the different forms of fear, love and desire in the current Madrid through David, a teacher who loves myths, who will guide the reader through the main plot. His girlfriend’s death will be the first of a series of strange, and apparently unrelated events that have started to occur in different parts of the city. This chaotic situation is becoming uncontrollable, and a feeling of unease seizes Madrid as if it were an epidemic. The bewildered and furious masses come into this conflicting scene, alongside the manipulators, the demagogues, and the prophets; acting as a dramatic choir in a history full of opposing passions and realities… Evil does not obey known patterns and the author presents it as something unapproachable and destabilizing, which jumps from one character to another in a choir novel and in an enigmatic and enveloping atmosphere; something unprecedented among the works of Jesús Ferrero.

At the same time, a more familiar and crime-related form of evil emerges in the city, and it leaves the characters feeling the same sense of uncertainty and fear that they would feel if they were experiencing the unknown. The two forms of fear are spread out throughout an agile and dizzying narrative, where surprises do not stop until the very end.

"The voice of Jesús Ferrero stands out by its purity, the strength of its imagination, the softness and richness of its tones, and its subtle and refined style." Jorge Semprún

"A great writer and a great reader." Miguel Delibes