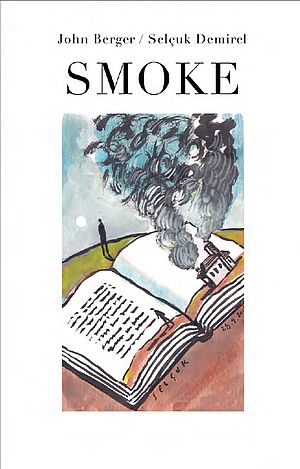 "Not since D.H. Lawrence has there been a writer who offers such attentiveness to the imperatives of conscience." Susan Sontag

Smoke is a personal memoir of smoke: “There’s never smoke without fire.” A delicious little book, biting and poetic, combining aphorisms and reflections about smoke in its different manifestations. On these pages, smoke is revealed as an ambivalent sign of the transformations in modern society. Through the illustrations, we see the contrasts between past and present in potent images: “We smoked in trains and even on planes,” but overnight, “Smokers became inadvertent killers.”

The texts are full of the keen originality that characterises John Berger’s work, splendidly illustrated by Selçuk Demirel. The two already worked together on Man on a Beach and Cataract, which have been translated into several languages.

"Smoke, then, really is a gift, only not one that you merely purchase—Berger always hated the idea of art as commodity. Instead, and against all cynicism, it’s something passed between Berger, Benjamin, Demirel, and the reader, who together form a smoking circle wherein a story might be told. Smoke, for those who will have it, is a cigarette of late style." Jonathon Sturgeon, Art in America