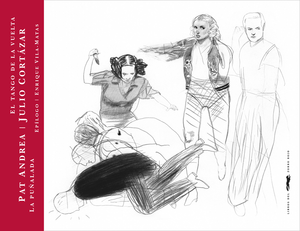 “On the fifth day he saw him following Flora, who was going to the store, and everything became future, something like the pages that were missing in that novel left face down on a sofa, something already written and that was not even necessary to read because it was already completed before doing so, it had already occurred before it did in reading”.

The Stabbing / The Return Tango was born from the collaboration between Pat Andrea, then a young Dutch painter, and the Argentine writer Julio Cortázar in 1979

Andrea travelled to Argentina on March 25 1976, a day after the coup that began the dictatorship of General Videla. The brutality and the commotion that he lived through during that time led him to create, in Europe, a series of thirty-four drawings whose obsessive theme is stabbing, an image also taken from that tango of the same name played by Juan D'Arienzo's orchestra.

With the idea of ​​making a book from these illustrations, Pat Andrea contacted Julio Cortázar in Paris, who, after seeing the illustrations, was fascinated by them and decided to write a story for him: The Return Tango.

The Stabbing / The Return Tango is a work that until now was practically inaccessible, created by one of the most outstanding Latin American writers of the 20th century and one of the most representative plastic artists of neo-expressionism.