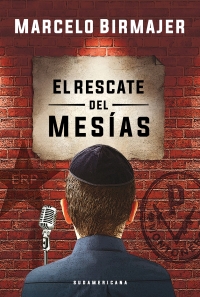 El rescate del mesías / The Rescue of the Messiah

"Life was unfair. No revolutionary party, no matter how powerful, could change that."

In October 1973, Argentina is a hotbed of repression, guerrillas and revolutionary splinter groups. Perón threatens to return to power for the third time, and Israel is attacked by Egypt and Syria, sparking the Yom Kippur War. The world seems to be on the brink of disaster as stand-up comedian José Mifkad returns home one night after performing at a wedding. On his way, he witnesses a scene that will become an obsession: on Avenida Córdoba, he sees a nun walking and stopping to greet a man in a suit. They look like two old friends meeting on the street, until the nun pulls a machine gun out from under her habit and shoots the man to death.

This is the starting point for an endless series of hilarious intrigues in the life of the clumsy, romantic Mifkad who, without quite knowing how, is caught up in a series of misunderstandings, amateur counterespionage, mistaken hot pursuits, and sexual adventures that will complicate his existence in ways the reader can’t begin to imagine.