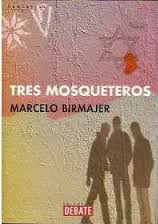 Elias Traum, a former Argentinean currently residing in Israel, returns to Buenos Aires after twenty years of absence to mourn his two friends- two fellow Jews who together with him once comprised "the three musketeers."These young men signed their own death sentences when they joined the Montoneros, the left-wing Peronist guerrilla group, back in the bad days of the Dirty Wars in the 1970s and 80s.

Javier Mosan is an unmotivated Jewish journalist who writes for a popular daily newspaper in Argentina. His main hobbies are indulging in sexual fantasies and dodging writing assignments. When Mosan is sent to interview Traum, he believes it will be yet another routine job. Yet upon arriving at the airport Mosan is attacked, while Traum is kidnapped, mugged and then deposited on the side of the road like so much garbage. There is no doubt that the past has returned to take revenge.

But what past is it? The revolutionary or the romantic? And how is the Israeli Intelligence involved? The story takes us from the bars of Buenos Aires to the beaches of Mar Del Plata, through a forgotten childhood and an era of dictatorship, between memories and reality, until everything converges in an exciting, thrilling ending.