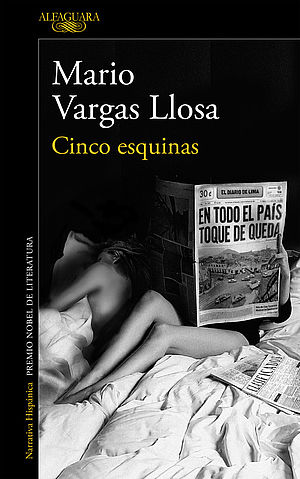 A rich businessman, Enrique Cárdenas, is a victim of blackmail by a famous tabloid editor. When he refuses to pay, photos are published of Cárdenas participating in an orgy with prostitutes and drugs, unleashing a scandal that makes the covers of all the gossip magazines and places him in the line of fire of damning Lima society gossip. The situation becomes even more hellish for Cárdenas when he is accused of a murder occurring in Cinco Esquinas, one of Lima’s most poverty-stricken neighbourhoods. He is innocent, and in all of Peru there is only one woman capable of taking down the true culprit. A cynical journalist of doubtful morals, who has spent her career slandering and inventing scandals about the adversaries of Alberto Fujimori’s government in order to publicly ruin their reputations, finds the opportunity to redeem herself by honouring the true mission of her profession for the first time in her life.

“A busy fresco of betrayal and retribution.”  The Guardian

“An unforgettable picture of how art and ideas are treated by totalitarians.” The Herald

“With its blend of documentary sources and invention, The Neighborhood is Peruvian pulp fiction of rare, exaggerated nastiness and the darkest satire.” Evening Standard

“A devastating criticism of the hypocritical Peruvian bourgeoisie of the Fujimori years.” Jesús Ferrer, La Razón

“La Retaquita is the best character in Cinco esquinas, and a true Lisbeth Salander of the developing world.” Sergio Vila-Sanjuán, La Vanguardia

“Everything is masterful in this novel reflecting the malicious wisdom of a veteran writer and the new, inexhaustible creativity that dazzled us over half a century ago.” José-Carlos Mainer, El País-Babelia