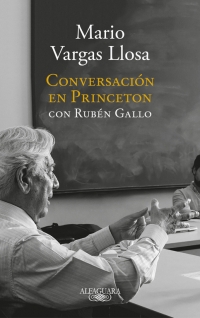 Princeton University, New Jersey, 2015. For a semester, Mario Vargas Llosa taught a course on literature and politics with Rubén Gallo. Both men spoke to the students about the theory of the novel and the relationship between journalism, politics and literature through five books by the author: Conversation in the Cathedral, The Real Life of Alejandro Mayta, Who Killed Palomino Molero?, A Fish in the Water, and The Feast of the Goat.

During these conversations, the Nobel Laureate speaks with his usual lucidity of the writer’s craft and the challenges he faces while constructing his novels, but also offers an intelligent analysis of today’s world. Particularly moving is his talk with Philippe Lançon, the Charlie Hebdo journalist who survived the Islamist attack that same year.

Three complementary perspectives converge in this book: that of the author, who reveals the creative process behind his novels; that of Rubén Gallo, who analyses the different meanings Vargas Llosa’s works take on at the time of their publication; and that of the students, whose reflections and questions give voice to millions of Vargas Llosa’s readers.

Conversation at Princeton is an unparalleled opportunity to attend a master class on literature and reality, taught by one of the writers most widely recognised and valued worldwide.

“Mario Vargas Llosa has surprised us with a new book, which, although it is not a novel, involves what he does best: creative, literary orality, in the style of Borges.  And it draws on the multiple perspectives provided to him by his profession as an intellectual and as an observer of the more immediate reality – so faithfully reflected in his newspaper articles, which are something like short essays a la Montaigne.”  La Tribuna