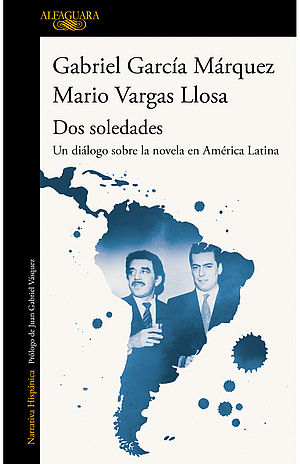 “In this book there are more valuable lessons on the novelist’s craft than at any faculty of literature.” Juan Gabriel Vásquez.

In September 1967, the two young authors Gabriel García Márquez and Mario Vargas Llosa met up in Lima to discuss Latin American literature. The former had already sold thousands of copies of One Hundred Years of Solitude. The latter had just won the Rómulo Gallegos Award for The Green House. Today they are universally considered two of the greatest exponents of literature in Spanish, but at that time they were two young people who were just starting out on their careers as novelists. In Dos soledades, two writers, two literary geniuses, two different ways of understanding literature, two rather contradictory temperaments, two different ways of telling stories, come face to face. Those were the times when the boom was brewing, when a name has not yet been coined for what we refer to today as “magical realism”. In these thrilling pages, the reader attends a conversation unlike any other.

The edition includes texts by Juan Gabriel Vásquez, Luis Rodríguez Pastor, José Miguel Oviedo, Abelardo Oquendo, Abelardo Sánchez León and Ricardo González Vigil, who recall that dialogue, with most of them as witnesses. And there are also two interviews with the Colombian writer, a selection of photos, and the assessment Vargas Llosa makes today of the life and work of García Márquez.

“A dialogue that [...] imbued itself with the narrative magic of both of them: nobody noticed the passing of time.” Carmen Naranjo, EFE

“Here is Vargas Llosa: novelist-cum-critic and possessor of an exacerbated awareness of his profession, always with the scalpel at the ready. At his side, García Márquez makes great efforts to defend his image as an instinctive, almost wild narrator, allergic to theory and poor at explaining himself and his books; but he knew very well what each screwdriver in his toolbox was for. And, like any great novelist, he understood the art of reading very well.” Juan Gabriel Vasquez

“This book will help to better understand the position of today's Latin American novelists and to assess the reasons for the splendour that the genre has achieved on this continent.” José Miguel Oviedo

“That dialogue fused life and literature, theory and practice, imagination and reality, and explained a great deal about the novel and novelists.” Abelardo Oquendo

“A great event, wonderful, fluid, entertaining and very important for any young person who wants to soak up the atmosphere of literature, whether by reading it or writing it.” Abelardo Sánchez León

“That great duo of the Latin American novel boom appeared in a literary concert the likes of which I have never heard before or after in all my life.” Ricardo González Vigil