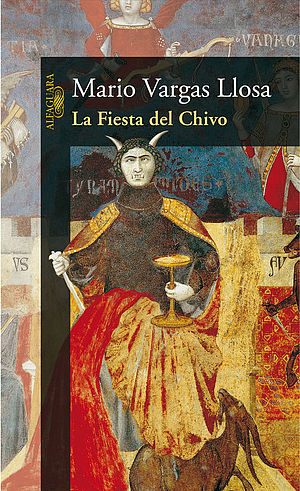 La fiesta del chivo / The Feast of the Goat

Haunted all her life by feelings of terror and emptiness, forty-nine-year-old Urania Cabral returns to her native Dominican Republic, and finds herself reliving the events of l961, when the capital was still called Trujillo City and one old man terrorized a nation of three million. Rafael Trujillo, the depraved ailing dictator whom Dominicans call the Goat, controls his inner circle with a combination of violence and blackmail. In Trujillo's gaudy palace, treachery and cowardice have become a way of life. But Trujillo's grasp is slipping. There is a conspiracy against him, and a Machiavellian revolution already underway that will have bloody consequences of its own.

In this masterpiece of Latin American and world literature, Mario Vargas Llosa recounts the end of a regime and the birth of a terrible democracy, giving voice to the historical Trujillo and the victims, both innocent and complicit, drawn into his deadly orbit.

“Mario Vargas Llosa has returned to the historical novel with the artistry accumulated over the course of what is now an extensive literary journey. The result is a splendid book, one of the best his undeniable talent has produced.” Joaquín Marco, El Cultural

“Dr Vargas Llosa has written much more than the story of an assassination [...]. This is a triumphant return to his best literature.” Javier Aparicio, El Periódico

“This novel will trap anyone who falls into its clutches. The narrative feast organised by the author invites one to remain sleepless until the final lament of last hope [...]. Once again, we can enjoy a torrential talent, one that is poured into the voices and events of a book full of moral uncertainties.” Andrés Magro, Diario 16

“Not only does Vargas Llosa bring back the tradition of the dictator novel, rooted in Valle-Inclán’s esperpentic Tyrant Banderas, but he returns to what many regard as his best period as a writer, when he produced complex, broadly developed novels. This began with The Time of the Hero and ended with The War of the End of the World.” J. A. Masoliver Ródenas, La Vanguardia