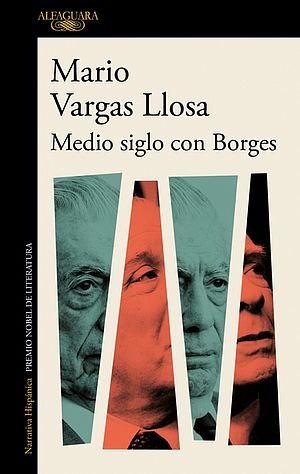 Medio siglo con Borges / Half a Century with Borges

One of the most extraordinary writers of the 20th century, Jorge Luis Borges, seen through the eyes of Nobel Prize winner Mario Vargas Llosa.

“Although absolute perfection does not seem to belong to this world, even in the works of the greatest artists, if anyone came close to achieving it, it was Borges.”

“This collection of articles, conferences, reviews and notes bears witness to over half a century of reading an author who has been an endless source of pleasure for me since I read his first stories and essays in the Lima of the 1950s. I have reread him many times and, unlike what has happened with other writers who marked my adolescence, I’ve never been disappointed. On the contrary, each new reading revives my enthusiasm and enjoyment, revealing to me new secrets and subtleties of the world of Borges, so unusual in its themes and so transparent and elegant in its expression.”

“I have always read Borges not only with that feeling of exaltation evoked by a great writer but also with an indefinable sense of nostalgia, and the sensation that something from that dazzling universe born of his imagination and his prose will always elude me, however much I admire and appreciate him. The handful of books he wrote, always short books and as perfect as a circle, where one has the impression that nothing is missing or superfluous, have had and continue to have an enormous impact on those who write in Spanish.”

“The same as certain articles in the successive volumes of Contra viento y marea (Making Waves), or his essays on Victor Hugo and Onetti, or some apparently minor work such as Cartas a un joven novelista (Letters to a Young Novelist), those books contain the most complex, passionate and persuasive vision of the novel and the profession of novelist that I know of. They also provide the best stimulus a novelist can find to write, a stimulus only inferior to that provided by Vargas Llosa's own novels.” Javier Cercas,  El País