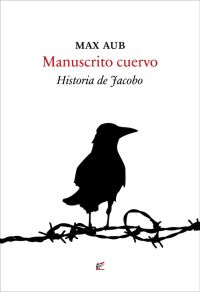 Manuscrito cuervo. Historia de Jacobo / The Manuscript of a Crow

A delirious satire. The Little Prince flying over a concentration camp.

This is a fascinating story about life in the French concentration camp of Vernet d’Ariège, where Max Aub was detained in the 1940s, in which an ironic, acerbic portrait of the human condition (that strange species with no feathers) is traced out. A treatise on the life of men narrated by a crow in a critical and humorous tone, with Max Aub deploying all his literary genius.

According to the crow there are three kinds of men:

A. Those who tell their story.

B. Those who do not tell it.

C. Those who don’t have one.