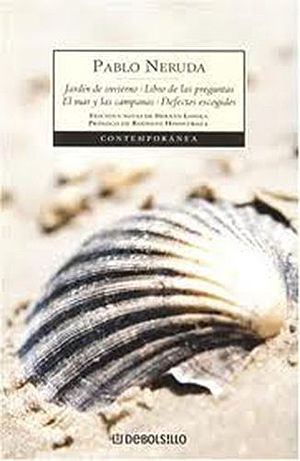 El mar y las campanas / The Sea and the Bells

Sea salt, foam, ocean waves, the sound of bells carrying over the water, his love for his wife Matilde, the migratory birds and winter rain of southern Chile, the birth in gunfire of his country, the destiny of the Chilean people—all of these passions helped guide Neruda's "flight of spirit" as he composed The Sea and the Bells, pulling "one dream out of another." Longing to retreat from the noisy busyness surrounding him, the Nobel poet permits the rush of waves to carry him into meditative states. These poems, found on the poet's desk at the time of his death, include his final poem, a love song to his wife,Matilde. Facing imminent death, he remarks in the past tense: "It was beautiful to live / When you lived!"