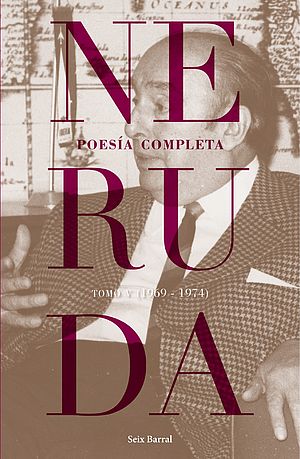 Half a century has gone by since Pablo Neruda was awarded the Nobel Prize in 1971 and this fiftieth anniversary coincides with the publication of a revised edition, including unpublished poems, of the final volume of his complete poetry.

This fifth volume contains the poetic output of his later years, both in prose and in verse. It begins with Fin de mundo, a book that also inaugurated the apocalyptic facet of Neruda's work and which was written precisely during a time of freedom struggles and utopian expectations.

Although the poet died on 23 September 1973, this volume extends into 1974, the year when six posthumous collections of poems were published, some with a nostalgic feel to them: scenes from past life, memories of great friendships, meditations on death and, in parallel, a deep concern for what was happening in Chile.